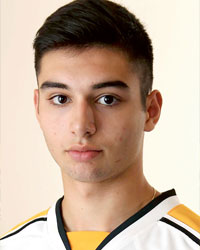 Scouting Reports:
“Two-way center that excels as a goal scorer, Mattheos drives the net hard and challenges defenders to knock him off the puck as he displays very good puck protection skills, strong on his skates and shows good smarts and hockey sense in both zones; two-way player who works hard in both ends.” – Brandon Holmes, Riding Pine Hockey

“A strong center with size and plays a strong two-way game…a powerful skater who generates impressive speed north-south… has a very strong stride and sound technique that allows him to push the pace of a rush…possesses decent hand-skills, and is very powerful on the puck making him tough to knock off possession…drives the net hard and is a near impossible load to stop when he comes trucking down the ice…has a real solid shot with quick release that he can make an impact on the scoresheet with…a real workhorse on the ice, getting in hard on the forecheck, taking good angles to pucks and pressures defenseman…battles hard along the wall and proves to be a difficult player to out battle…comes back hard defensively and knows his role in his own end…supports his teammates…a nice complimentary winger who brings some skill and a healthy amount of sandpaper.  (May 2016)” – Future Considerations