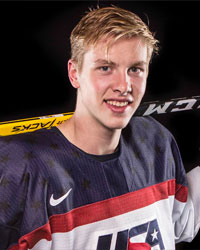 “A two-way defender in the Ryan McDonagh mold…this big wing-spanned blueliner is just scratching the surface of his ability…the big Texan is a minute-muncher who can contribute at both ends of the ice…a steadying presence in his own zone…strong and physical, not afraid to flex his muscle and willing to play it nasty if required…pins his man and does not let him back into the play…generates decent speed and keeps his gaps tight because of his reach and skating…handles the puck well, although not overly flashy or very creative offensively…can play in all situations…plays a strong transition game, moving the puck quickly and accurately up to his forwards…does not back down from a battle…his point shot is improving with added strength…has loads of room to grow, but also the potential to be a difference-maker at the NHL level.” – Future Considerations